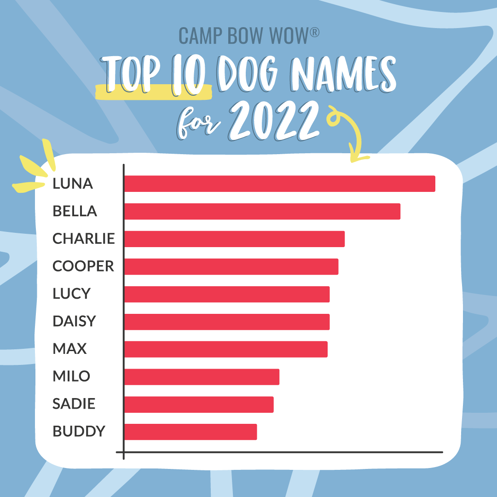 The top names are based on Camp Bow Wow's database of nearly 400,000 Campers across the U.S. and Canada.

Luna claims the No. 1 spot this year, just barely edging out Bella, which comes in second after the two names were neck and neck for much of the year before Luna pulled decisively ahead. Rounding out the Top 10, in order, are Charlie, Cooper, Lucy, Max, Daisy, Bailey, Milo and Sadie. Milo debuted on the 2022 list, knocking Buddy out of the Top 10.

Camp Bow Wow has had an estimated 40 million dog visits since opening the first Camp in 2000, and it has seen trends change over the years. But what's in a name? According to Camp Bow Wow's Animal Health and Behavioral Expert Erin Askeland, MSc, CPDT-KA, CBCC-KA, a dog's name can have a significant effect on their life.

"Your dog's name will be used for training purposes, so it's important to choose carefully," said Askeland. "Short, two-syllable names are helpful for getting your dog's attention, while names that sound like commonly used words or cues could confuse your pup. For example, 'Shay' is cute, but it may sound like 'stay' to a dog."

She also says names that end in vowels help dogs distinguish their own name from others because vowels change vocal tone - something dogs are highly attuned to with their acute hearing ability. Names ending with harder sounds, like Breck, can also be easier for a dog to distinguish from other words.

Americans adopted nearly a million dogs in 2021, according to recent pet adoption statistics compiled by Chewy. Shelter dogs often have a name already, but Askeland says it's OK to change it. She advises new pet parents to pick something they like and stick with it. "Be sure to give lots of love and positive reinforcement when using the new name, and your pup will adjust just fine."

No matter the dog's name, a great way to celebrate National Puppy Day is treating a pup to a fun day at Camp for socialization, exercise and enrichment.