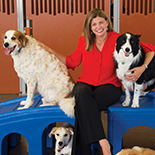 WESTMINSTER, Colo., Jan. 30, 2018 /PRNewswire/ -- Camp Bow Wow®, the largest and leading doggy day care and boarding franchise, is kicking off 2018 on a high note as the brand has been recognized for the third consecutive year as #1 in the Pet Businesses Franchises category on Entrepreneur's Franchise 500 list. In addition, the $100+ million dollar company is newly ranked #146, a 58 placement jump from last year's ranking, among all franchises. Camp Bow Wow has proven to be a brand to watch in 2018 and with more than 1,000 companies applying, the 39th annual Franchise 500 ranking is one of the most competitive in its history. These accolades are a testament to the brand's position as the leader of the Pet Care industry.

"Our team is proud to be recognized within the pet industry, franchise industry and business world with honorable accolades and wonderful opportunities. Our number one priority is giving all pets the commitment, care and safety they deserve, so receiving these distinctions by doing just that, is simply an added bonus," said Camp Bow Wow President, Christina Russell.

On top of the recent overall brand recognitions, Camp Bow Wow President, Christina Russell has been acknowledged as a notable thought leader this month, named as one of Inc.'s Top 100 Leadership Speakers for 2018. As an expert in franchising, business growth, leadership and more, Russell has not only been a speaker on the distinguished LEADx Leadership podcast, but she also regularly speaks at pet and franchise industry focused expos and trade shows.

In late 2017, Russell was chosen as a keynote speaker at the Pet Boarding and day care Expo in Hershey, PA. The convention, known as the world's largest pet boarding expo, attracts the top players in the industry. Leading a presentation titled, "Boarding and Daycare Unleashed: Inside Tips from the Big Dog," Russell shared ideas and best practices for staying ahead of the expanding Pet Grooming & Boarding Industry.

At her next speaking engagement in February, Russell is slated to be on a panel titled "Leadership: The Formula for Success" at the high-profile International Franchise Association Convention in Phoenix, Arizona. The panel will consist of senior-level franchise executives, who will share their insights about their leadership journeys, impacts made, mentorships formed along the way and more.

Camp Bow Wow additionally plans to propel its strong growth and leadership position in the pet and franchise industries into the New Year. The brand, which has sold more than 180 franchises in 42 states and Canada, expects to reach new milestones in 2018. Through its thoughtful expansion strategy, Camp Bow Wow projects to open 20 Camps in 2018, and reach more than 300 units in the next four years, primarily focused on domestic growth across the US and further expansion within the Canadian markets.